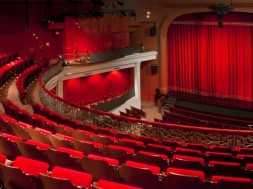 With VorpX and Virtual Desktop you can use virtual reality headsets to virtualize a giant screen computer screen, it is even possible to watch movies in VR with LiveViewRift or the Oculus Cinema app on the Gear VR. However, Valve has just announced  the SteamVR Desktop Theater Mode, allowing players to play their entire Steam library in virtual reality!

The opportunity to play on all Steam games on a big screen VR with Steam VR, was a feature that was just a matter of time for it to be announced and it is good to see it’s coming from Vavle.

Don’t say that playing 2D games on a conventional screen is much more comfortable and the resolution on an monitor is much higher too fast. Although that is a fact the low persistence OLED screens in the Vive and Rift offer almost certainly a better screen compared to most LCD and Plasma screens. Also 3d-games offer a superb experience. Games like Tomb Raider, Trine and The Witcher are magical on the virtual 3d screen.

The SteamVR Theater Desktop mode is currently in early beta and unavailable to the public. It will be compatible with VR helmets like the HTC Vive and other and will debut this week at GDC.