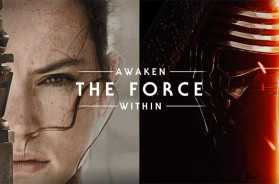 To celebrate the latest part of Star Wars, Disney announced a virtual reality star wars film! It gives Star Wars fans the opportunity to participate in the film!

The release of the virtual reality experience of Star Wars VII is scheduled for  December 2 and is made in collaboration with Google and Verizon. It is the first time that Disney combines Google Cardboard and Virtual Reality with one of their films. It won’t be the last VR video we will see from Disney, since they invested millions in Jaunt earlier this year.