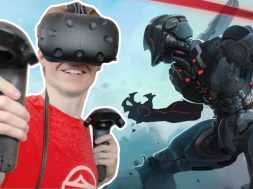 Sairento VR is an action role-playing game set in a futuristic Japan. You will be playing as a Samurai that is able to jump through time and space. Get ready, grab your katana or gun and face your fears.

The game can be played on the HTC Vive and Oculus Touch.

In Sairento you play as a Samurai that serves the Silent Ones, a righteous but hidden organization of seemingly ordinary people who practice the long forsaken code and martial arts of the ancient samurais and ninjas. Your mission is to uncover the secret behind other members of the Silent Ones turning into nano-infected ninja robots.

Check it out on Steam: http://store.steampowered.com/app/555…