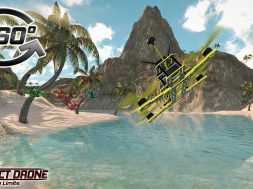 Not far from my house lies Schiphol airport. With almost 60 million passages a year I see a lot of airplanes landing and taking off every single day. Flying is an amazing thing that’s why I bought a micro drone a year ago. It inspired my brother in law to start a website and dedicate all his spare time too these flying toys. This summer I bought a bigger drone for myself, not realizing I lived in a no-fly-zone! In Holland that means, it is illegal to fly a drone even 1cm from the ground. A waste of money and a big disappointment

As I VR enthusiast I thought of flying drones with VR, but now my dream was shattered. Until I found the great Kickstarter project for a game called Project Drone: No Limits. Why not fly a virtual drone?! That could be even better than flying a real one!

The goal of this game is to train your skills and continue to get better and better at drone flying. Eventually you can show off your skills to the world and become the best drone pilot ever. The game brings action drone flying in an innovative way to your PC and game console. I can´t wait to grab this game.

The developer is planning to make a version for the Vive, Rift and PlayStation VR. For only € 18 you can pledge for the PC edition. The console edition will be € 29 euro´s and you get Early access to the game.

Want to see more, just check out the Kickstarter page for more info.