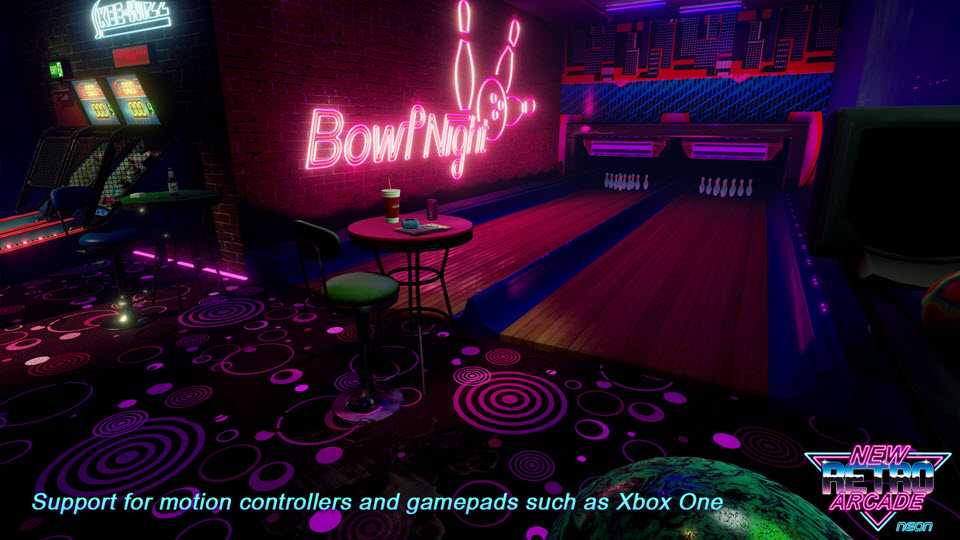 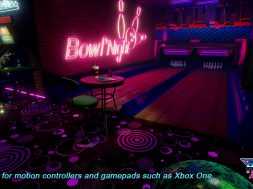 A very long time ago, there were no computers, smartphones and game consoles, you had to cycle miles away to play a game in the arcade! In an often somewhat darkened room, only lit by neon lights, you played games like Pacman or a co-op games like Double Dragon with another gamer. You easily made new friends and shared your passion for games with them. Unfortunately, that changed in the late 80s with the arrival of powerful computers like the Atari, Amiga and Commodore. With them appearing in the living room, it was no longer necessary to cycle through all weathers for a little game. Soon consoles purely focused on gaming like the NES and Sega Master System took over and there was absolutely no reason to spent money so you could play Pacman a single time. The only reason to go out was to rent a game, something that is also no longer necessary in today’s on demand world. However, the real old-school gamer misses the nostalgic feeling to walk through a hall full of games and the connection with other gamers so they can share their passion. That may also be why I see more and more entrepreneurs attempt to open new arcades. Unfortunately, I see them close their doors quickly after that. The advent of virtual reality opens new doors and the developers at Digital Cybercherries have noticed that right away.

Digital Cybercherries developed New Retro Arcade Neon; a virtual arcade, completely in the style of the 80s! During the development phase it was possible to download the game for free so a few lucky Oculus Rift DK2 owners could already get a taste. The feedback from these testers was used by Digital Cybercherries and the game has been developed further. The game is now available on Steam and compatible with HTC Vive virtual reality headset. 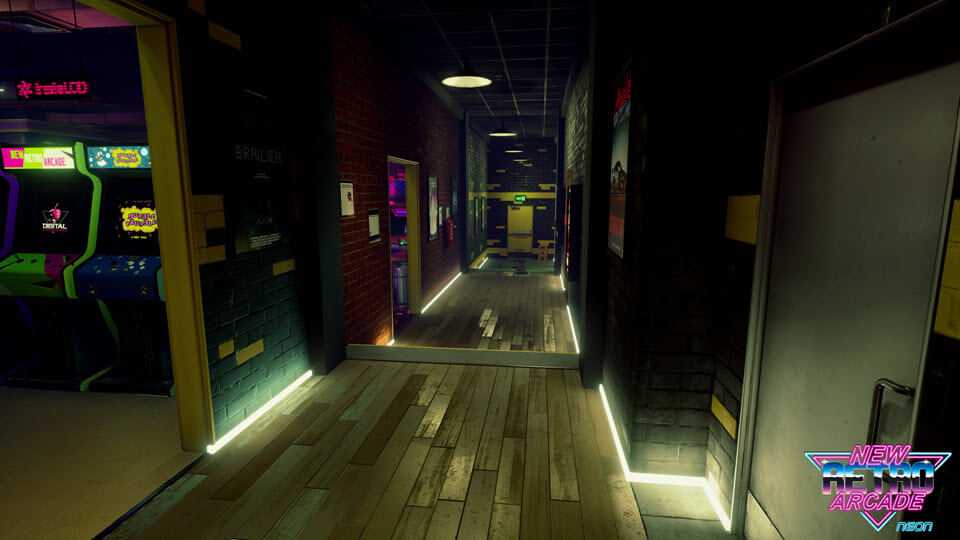 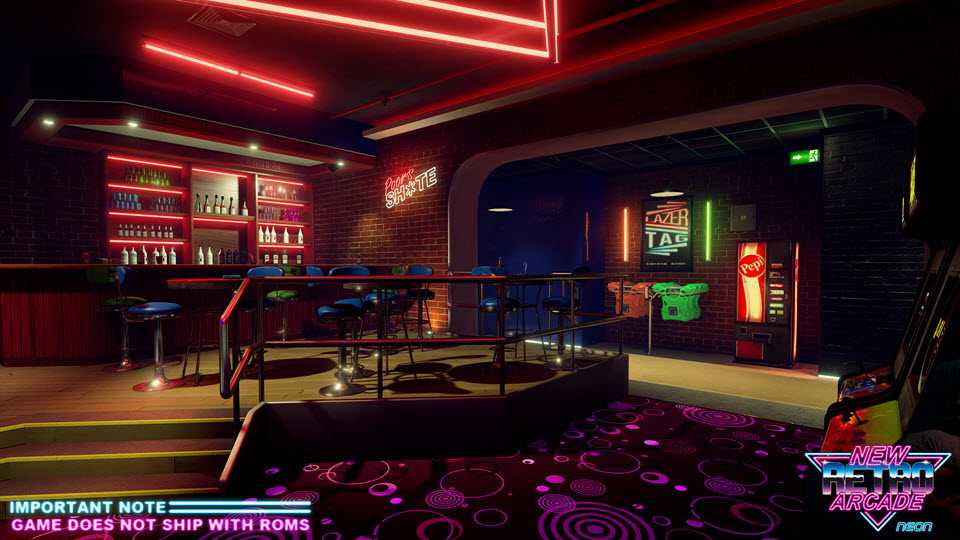 The first time I stepped into New Retro Arcade Neon I found myself in front of an arcade cabinet. With an old arcade light gun, I chose to play the classic mode first. In this mode you are present in a smaller room without extra games such as bowling or basketball. When I stepped into the virtual space, I immediately got the feeling that I stepped back in time. Surrounding me, in this dark room, were many arcades! Full of enthusiasm I stepped towards one of the cabinets. Unfortunately, I got the message I had to configure the cabinet first. Slightly disappointed I went exploring the area, which was perfect in every detail. The Vive controllers are fully in SNES-style, in my shade I noticed I didn’t wear the Vive headset, but a Nintendo Virtual Boy! I was able to grab almost every object in the room like an old VCR with tapes, a Walkman with cassettes and a classic Gameboy (though it had to be configured first to play). It was neat! 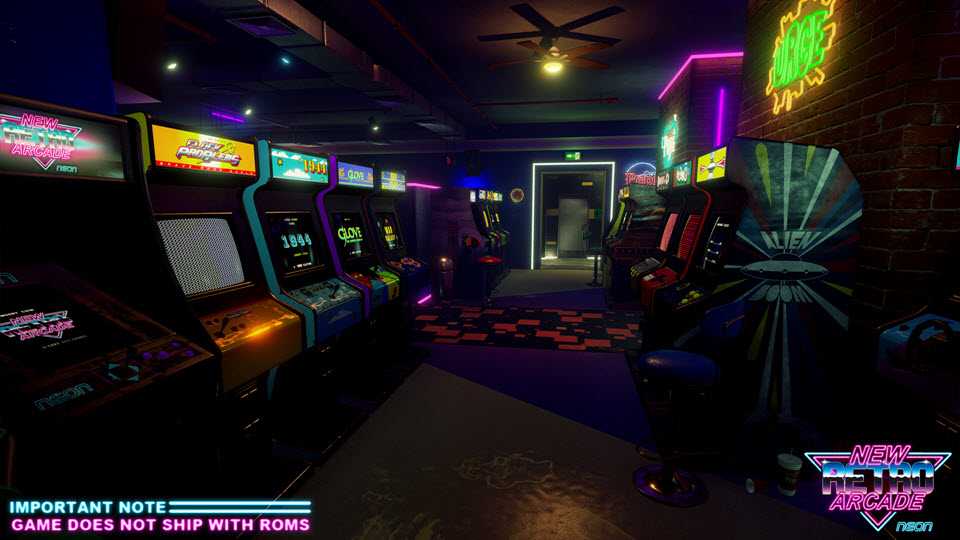 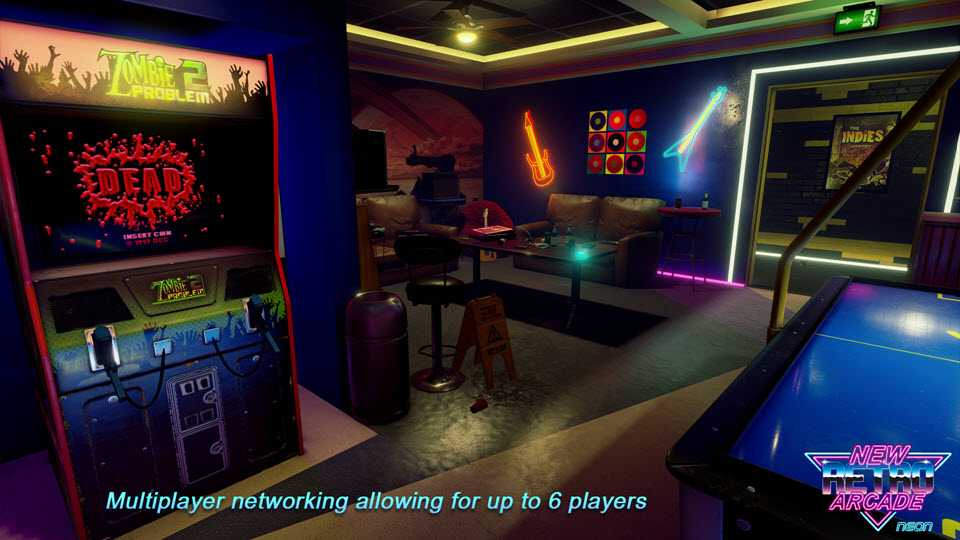 After a short walk through the classic space I chose to switch to the Neon mode. In this mode I entered a much bigger arcade (or rather a kind of basement). Next to me was an old-fashioned Pepsi fridge and to my surprise it worked after I pressed the button a can of Pepsi rolled out! I took a walk along the toilets and came into a room with an air hockey table, unfortunately there was no one else to play since I chose the offline mode (multiplayer is possible up to 6 people). A little further I found a basketball game. I carefully picked the basketball up and tried to throw it into the net. After a little practice it was great fun! Especially the part where you don´t have to pay for every game! After playing for a while I walked further along and found a theatre room. Next to the door were a number of videotapes and I toke one to the VCR that was standing in front of a cinema screen. After pushing the band in, the beamer started to play a trailer of the game. Very cool, since you can use your own videos as well.

I found a real bowling alley in the next room! I did pretty well, especially because I did not have to worry about the floor. After a few times of regular bowling I threw the bowling balls which was awarded me with one after another strike. After a few bowling rounds it was time to step out of the virtual world and take a look at the settings. 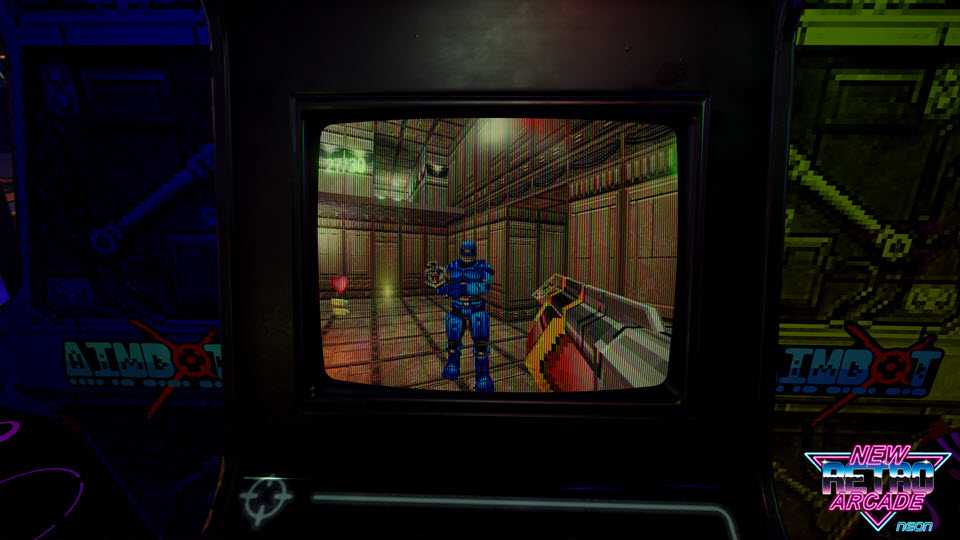 I’m pretty familiar in this area and I have attempt to build an arcade cabinet with RetroArch. The cabinet construction is never happened, but the software worked like charm. I still have a hidden and forbidden hard drive full with classics and emulators. It was time to grab them. Configuring New Retro Arcade Neon is a lot of work, I can’t deny that. For each case, you need to select the right emulator (a DLL-file), and the buttons have to be set correctly. After that you have to set a screenshot of the game or an image for the cartridge. On the other hand, it also gives a lot of freedom. You can design all arcade cabinets yourself! You can find the right sizes for your designs in the manual. After spending a day or two to adjust everything, it was time to cycle back to the arcade – uhmm to dive into it. The screenshots were wonderful on the cabinets and I jumped right behind the closest arcade and tried a game. Luckily I stood close to the wall since it caught my fall. The game was stuck inside my VR headset and I felt really faint. On my computer appeared an error. A little annoyed I started the game again and did another attempt, this time on the SNES. It worked better, although not quite what I had hoped for. Through the Vive controllers is simply not possible to press two buttons simultaneously. This means you cannot run in games like Super Mario World! It was fantastic seeing it work and if you really want to spent some time playing the SNES, it is possible to connect to another controller so you can use buttons simultaneous. The videotapes did well with my own movies. After a short walk it was time to try another arcade cabinet. Aladdin then? Yeah that worked, partly, since I could not find the start button on my virtual controllers. At least it didn’t crash, I could move around the joystick. I could clearly see that the game worked perfectly on the arcade, unfortunately I could not play it and didn´t want to spent more time on configuring the buttons. Well then it’s just throwing bowling ball true the air for me, which was already a huge pleasure. 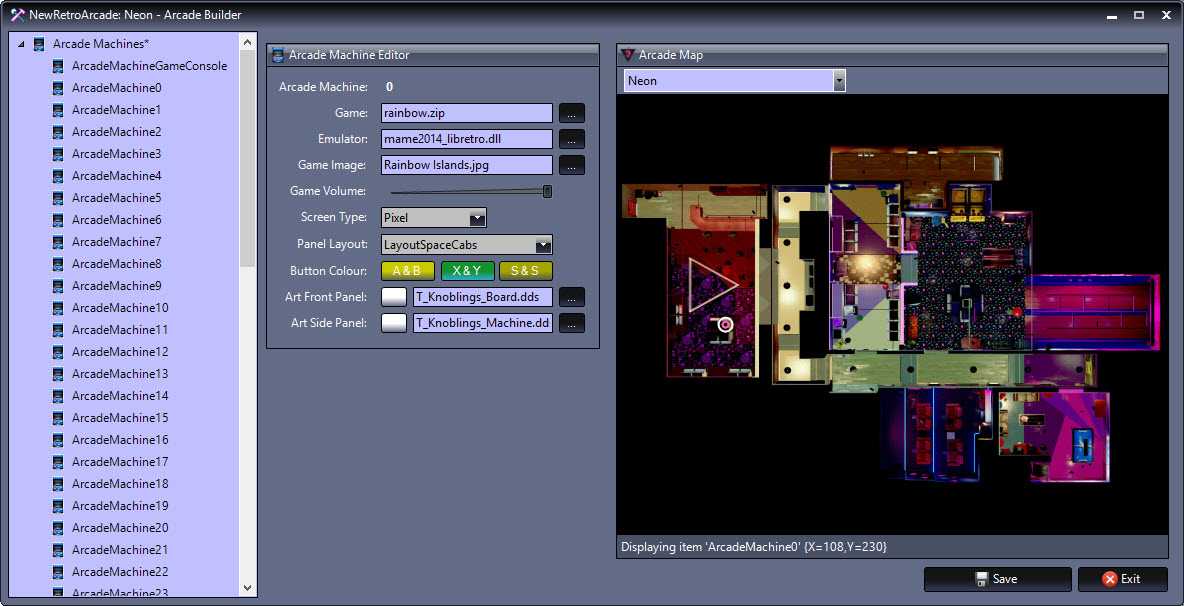 NewRetroArcade Neon is a great piece of software and I’ve greatly enjoyed being present in a piece of history. The game has been worked out in every detail and I really love it! Unfortunately, the software did not succeed to let me play the most important part. Configuring this game is a hell of a job and after you have put hours into designing and configuring each cabinet you expect it to work. Unfortunately, the software crashed regularly. A stuck game is an experience that feels a lot worse in virtual reality than just an error message on your screen. We hope that the developers quickly get all the bugs out and make configuring this game easier. I rather pay for every single arcade game using add in-game purchases and have an easy to use game, then a way to complicated configuration menu. I love to recommend this game, but you can´t expect an easy to dive in VR experience.