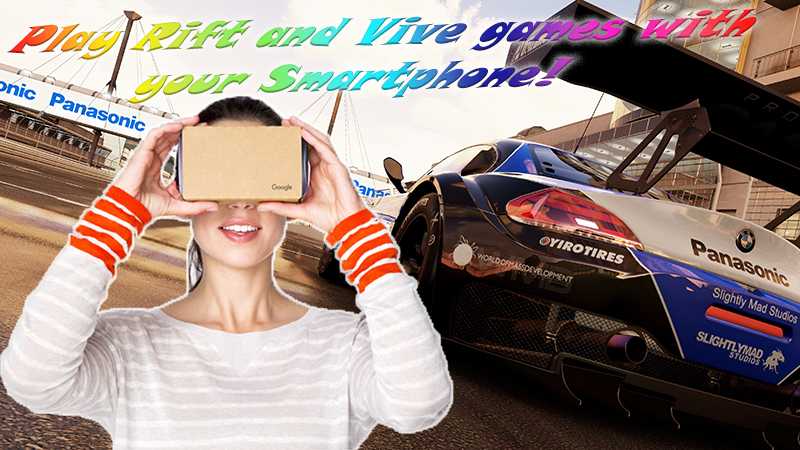 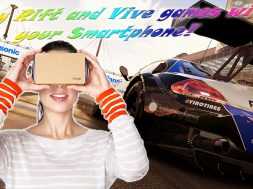 The most common complaint about virtual reality is the price of VR headsets. For this reason, more and more developers are looking for a cheaper alternative. The most logical choice seems to be the smartphone with its high resolution screen and same components that can be found in modern VR glasses like the Rift and Vive. It is therefore not surprising that more and more programs appear that let you create a VR headset from your smartphone.

What do you need for VRidge

First, you need a modern smartphone with at least Android 5.0. At the time of writing there is no support for iOS yet. If you want to make the connection over wifi, then you need a stable and fast wifi connection. RiftCat doesn’t do great demands on the hardware: an Intel Core i5-2500, 4GB of RAM and Nvidia GeForce GTX 650 video card should be sufficient. In contrast most VR games will be asking a lot from the PC and therefore we recommend to maintain the system requirements advised by Oculus and HTC so at least an Intel Core i5 4590 or AMD FX 8350, 4GB of RAM and NVIDIA GeForce GTX 970 or AMD Radeon R9 290. Finally, you need a mobile VR headset. These headsets can be found in supermarkets, toy stores and electronics retailers with a prices range from 5 to 100 euro. 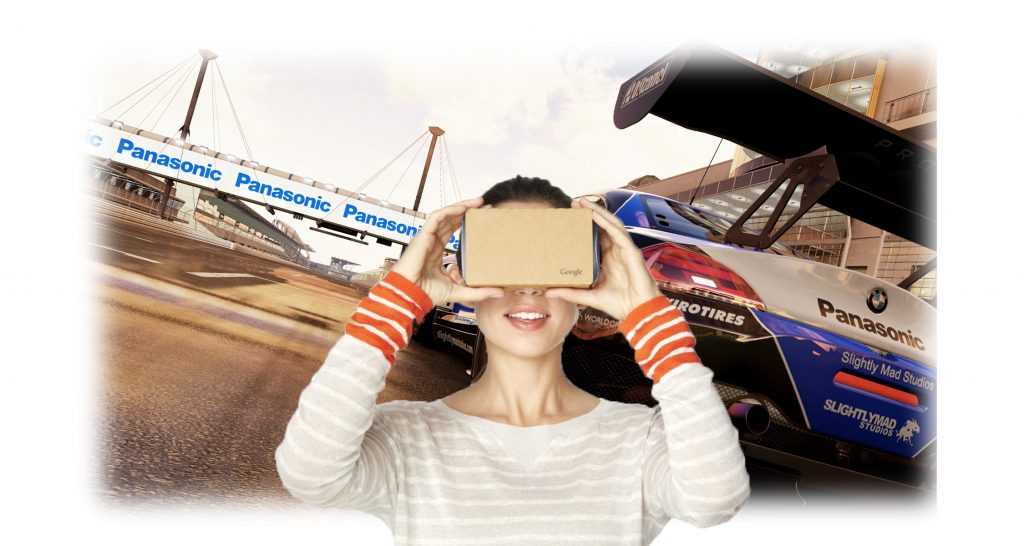 VRidge is not free, the full version costs 15 euro’s at the time of writing. You can try the program for free to see if it works well for your configuration. The trial lets you try it for 10 minutes per session. Download VRidge for the PC from www.riftcat.com and start the installation. When the installation is complete, press Start Using RiftCat. In the next window you can create an account. This can be an existing social media account or e-mail by clicking on the Register button. After creating and activating the account you can log into the program.

The installation of the app is no different than other apps, but we still added step for completeness. VRidge can be found in the Play Store or via the link: https://play.google.com/store/apps/details?id=com.riftcat.vridge. If after downloading and installing the app opens you select the name of your phone and you can connect via the desktop app if you are connected to the same Wi-Fi network or via a USB cable.

The Gear VR stands out with head and shoulders above the rest of the mobile VR headsets. This is partly due to the fact that Samsung used the platform of Oculus. The disadvantage is that you can not easily use other apps with your Gear VR. This may be via the program SideloadVR (an alternative to the oculus Store), but this way is quite a bit controversial. During the test kept repeating our Samsung the programs that we had downloaded from SideloadVR security risk entailed. The developer itself indicates that it is not to worry about, but we find it worth mentioning. For that reason, our preference is still given to the Google Cardboard app. Want to use the Samsung Gear VR version, you can find SideloadVR in the Google Play Store . To use SideloadVR, you need a developer account with Oculus. The app stands out step by step how to create an account and how you can install apps via SideloadVR.

Connecting to the PC via USB or WiFi. Wifi is the easiest way and you keep free from dangling wires to your smartphone. The disadvantage is that this method is more sensitive to delay. It is therefore important that the wifi connection is fast and strong enough to properly transfer the data. Start the program on the PC and click the Wi-Fi icon. Then launch the app on your smartphone. The program on the PC will automatically detect your smartphone. Click Yes to make the connection. If there is no connection check if the smartphone is connected to the same network as the PC. Often wifi amplifiers can cause problems. If the connection is not working, you can find your local IP address in program on your PC. This supports Awaiting connection at. Then tap the Connect app manually, enter the IP address and touch Connect. When asked whether the found phone click Yes to confirm.

The connection via USB is the most reliable. Please note that your smartphone does not automatically share your mobile Internet connection with your PC. You can avoid this by switching off while using mobile data or turn on airplane mode. Switch applications on the computer once the smartphone is connected via USB and the app starts. Click the USB icon and if the software sees the smartphone, click Yes to confirm. If there is no connection, make sure that USB tethering is enabled. This option can be found quickly by tapping the three indents left corner of the app and select USB tethering.

Through the program itself, you can download some simple games or demos. Many of the downloadable software was also offered through RiftCat during the early development phase of the Oculus Rift. The games can be found under the Play Games Library tab. Installation is easy with the Install button. If the software is installed you can start it by pressing Play.

You play SteamVR games through Steam. We assume that you already have a Steam account and that Steam is installed on your PC. Ensure that Steam has started and VRidge is connected with your smartphone. Then click the Play button SteamVR. The first time you do this, Steam will ask if it should install the software SteamVR. Make sure VRidge still connected to your smartphone and click the SteamVR logo right of the Steam window. Then click Start on the red text Room Settings. Choose the option Only Single, click Next, and make sure to calibrate your smartphone space facing your monitor when you press Middle Calibrate. Click Next and enter your own height in the Localize the floor window. Click Next and Done to complete the configuration. You can now start a SteamVR game and play real VR games.

Although RiftCat has come far with VRidge, it is obviously not comparable to the quality offered by the Rift and Vive. The main shortcoming is a positional sensor. A positional tracker follows the headset, so you can move to the front and back and sides. This restriction, combined with the sometimes-retardant image, can make you nauseous during use. In such a case you should turn off the headset and take a break. Try not to move fast with your head and not to move forward or sideways while playing. Simulation games like Elite Dangerous or Project CARS, in which you’re seated in a moving vehicle lend themselves nicely for VRidge and it is a good intermediate step if you still want to wait with the purchase of an expensive headset. There is coming one solution for this problem delivered by a company called LYRobotix. They have created a Motion Tracking System that will launch January 30th on Kickstarter.

In addition to its own library of games, it is also possible to run old Oculus Rift demos and games with VRidge. We call them old games, because it can only run games that are created with the SDK 0.8 or earlier. Many old VR games can be found on the website www.wearvr.com. On the website you can press the arrow beside the Oculus Rift button to filter for Oculus Rift DK2 games. If you have downloaded a game and unzipped click in VRidge Play Oculus Rift Games (0.6 – 0.8 SDK) and open the game.

08 VRidge adjust to your needs

Every smartphone has a different hardware and every VR headset different lenses, together with all unique PC’s it is a challenge to make things run with a smooth image. In VRidge there are a number of options to fix doubled images or a blurry vision. If a game is started you can see a wheel in the middle of the smartphone screen. Click on it to adjust the Interpupillary distance (distance between the pupils of the eyes) and scale (size of the image). Try this only if the app is not performing well. Through the desktop software can be adapted to the resolution and quality. Click the gear on the top right and again on the small gear. If the connection is very slow, you can try to put the quality and resolution down. It is also possible to adjust the frame rate, though the 60 frames per second is actually already too little for VR.

Revive is originally designed to play Oculus Rift games with the HTC Vive, but it also works with other VR headsets and with VRidge because it emulates a VR headset! Before you can use Revive you have to install Oculus Home and have an account. Go to www.oculus.com/setup, click Start Download and install Oculus Home. Run the program, and then skip the configuration wizard since there is no Oculus Rift to configure. Install one of the games, my advice is Lucky’s Tale. Then go to the website https://github.com/LibreVR/Revive, go down to Standalone games and then click Download the Revive Injector here. Extract the files to the installation of, for Lucky’s Tale. The default installation folder for Lucky’s Tale is: C:\Program Files\Oculus\Software\Software\playful-Luckys-tale. Drag the .exe file to the ReviveInjector_x64 and play your Oculus Rift game with your smartphone!

-2
10   2
previous Play PS4 and Xbox One games in Virtual Reality in your Vive, Oculus Rift and friends online
next My solution for the tracking issues