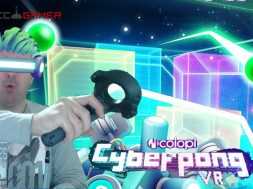 Cyber Pong VR is a retro styled modern pong game for the HTC Vive. The two Vive controllers are transformed into two paddles which you use to hit the ball. It is your task to use the ball to destroy the blocks before they get to close to the grid. If things get to hard, you can transform you peddles into special weapons like a gun, grabber or a bigger peddle.

All blocks have their own special abilities. The purple ones throw an orbs towards you, green blocks give an extra ball and the red blocks will explode. You can give the ball direction by curving your paddles. The harder you hit the ball the faster it will go.

The gameplay feels very natural and the visualization in the game is very clear and stylish. There isn´t a big learning curve, although I recommend playing the tutorial first. In the tutorial you´ll learn about the colored blocks and how you can use the special weapons. You´ll have to move your

In the single player mode, you can drill your skills. If you hold on long enough you will earn a place at the online and local leaderboard. The longer you can keep the blocks away, the higher you’ll rank.

The best thing about Cyber Pong VR is the multiplayer option, although finding an online competitor in these early days of VR can be quite difficult. The developers have well-conceived, since there is a small mini game available while you’re waiting. There is also a LAN option available for those who like to compete in the same room.

The game offers a really small learning curve and after playing for about five minutes I was fully immerged into the virtual environment. After ten minutes I started to get the hang of it and that motived to move quicker, dive for the ball, run around and really put some effort into getting a good high score.

Cyber Pong VR is a game that can be played endlessly and stays entertaining every time you start playing it. You can compare it a bit like the original Pong, Breakout and Tetris from the 70s, 80s and 90s, these games are still fun to play as well. Big difference with this one is that I´m exhausted after playing for longer than an hour. Great fun and exercise at the same time! Now I only need to get myself a waterproof VR Cover.