Previous Video PSVR bundle with Camera and PS Move
Next Video PlayStation VR will also be roomscale compatible!
prev next
0
0
0 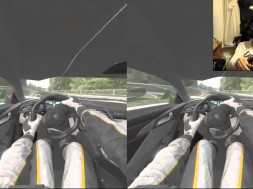 Project Cars is compatible Oculus Rift for a while now, but the VR support was poor at the beginning (who doesn’t remember the weird shadows). Nevertheless, developers have continued to improve the experience in every update and a perfect VR experience came closer and closer, including working menus in VR. To celebrate the official launch of the Oculus Rift Project CARS released a new trailer.

In the video underneath you can see some actual gameplay video playing with an Oculus Rift DK2, Logitech G27 and Playseat. Trust me, that’s an immersive experience.

0
0   0
previous PSVR bundle with Camera and PS Move
next PlayStation VR will also be roomscale compatible!