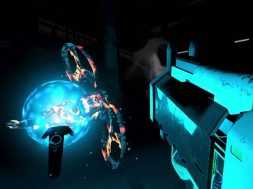 Blue Effect was one of the games that gave me a big smile on this year’s Gamescom. Blue Effect is a futuristic horror-survival first person shooter. While waiting at their booth, the developer was explained the game to me. The demonstration was done with the HTC Vive, but a port for PlayStation VR and the Oculus Rift is also planned. In Blue Effect you are dropped off in a dark forgotten world, armed with a Blue orb and a futuristic pistol. The developer told me the game was a standing experience for now and he was unsure if they were going to add the teleport function. The game will release as an early access game in September.

After waiting for a few minutes it was my turn to dive in the Vive. I was standing in a dark warehouse with a gun in my right hand and a blue orb in my left. “Throw the orb to see in the distance,” the developer told me. So I threw the orb away. Strange biomechanical creatures and biomechanical drones appeared. I started shooting them and felt really emerged after a few seconds of playing. More and more beings showed up and I was getting the hand of it. By throwing orbs in the air and shooting them the room lighted up in blue the full room. The best thing I liked about the gameplay was that my gun had endless ammo and I didn’t have to recharge it. When things get scary in VR and a gun is all I have to protect myself, I don´t want worry about my ammo.

After playing the complete level the demo was over. I really enjoyed playing blue Effect and I can´t wait to see the final result of this game.