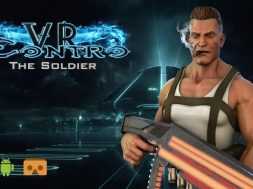 Contro VR Game is a run and gun power pack game which is designed to be played using Google Cardboard and other VR wearable headsets.

It is the first run and gun game developed using VR technology and rays of 3D. There are two modes of playing the game:

While playing this action thriller commando game, you will come across three stages: Easy, Medium and Difficult.

This game will make you feel as if you are a commando and your bag filled with rifles, armours and other ammunition.

It’s a life and blood game, each stage will have unique ferocious format. If you attack on enemy you will gain points else attack on you will subtract your life.

This VR Game will remind you of Contra video game which we used to play at home.

Set your hands on VR Contro, you are definitely gonna have fun!