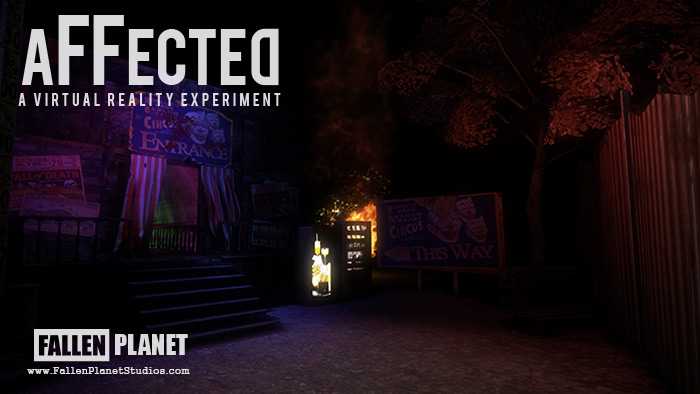 Affected – The Cabin, is not just a collection of routine jump scares, but a series of unfolding events and cinematic scenes that have been specifically designed to utilise the strengths of the Oculus Rift. It really is about immersing and transporting the user into a world unlike anything they have ever experienced before.

Affected offers a new level of immersion for gamers, heightened feelings of tension and more importantly, unprecedented levels of fear. The Oculus Rift has ushered in a new era in gaming and as a result, a new dimension in which to experience the ultimate in scare factors. There are no puzzles to solve, no coins to collect, just three nightmares for you to stumble through.

With randomly chosen multiple scares in each scenario, Affected’s new random scare generation will keep you on your toes, or even bring you to your knees.

Journey through three chilling environments: The Manor, The Asylum and the The Carnival. All hold their own dark secrets and their own unique scares. Play each chapter individually or attempt to complete the whole journey if you’re feeling brave enough. By utilising the Oculus Rift and Unity 3D, Affected launches player into their own worst nightmares. Cutting edge 3D graphics and dynamic sounds also work together to create an unparalleled immersive world like no other.