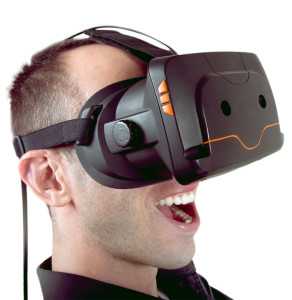 Shortly after Facebook took over Oculus VR, Vrvana announced the Totem as an alternative. The negative news about the privacy condition of Facebook, possibly helped the success of the Totem. Some people supported their Kickstarter as signal to Facebook. The headset in its final stages of development and pre-orders are possible.

The specifications of the Totem are similar to the Oculus Rift developers headset. The headset features an OLED display in 1080p and has a field of view of 90 degrees. With a a refresh rate of 75Hz it isn’t comparable to the consumer headsets. The lenses can be adjusted independently of each other, so that each eye can see clearly. At the front of the headset are two cameras that enable you to see everything in 3D.

If you look at the specifications of the Totem VR, it isn’t a rift or Vive killer. What sounds like a nice gimmick is its ability to connect other devices such as a PlayStation 4, Xbox One or Smartphone (HDMI output). But we haven’t a good experience with features like these. It is not a virtual screen where you look at, as you might be used with the Virtual Desktop program. With a price of 450 dollars we do not expect that the Totem VR will be the success the developers aim for.