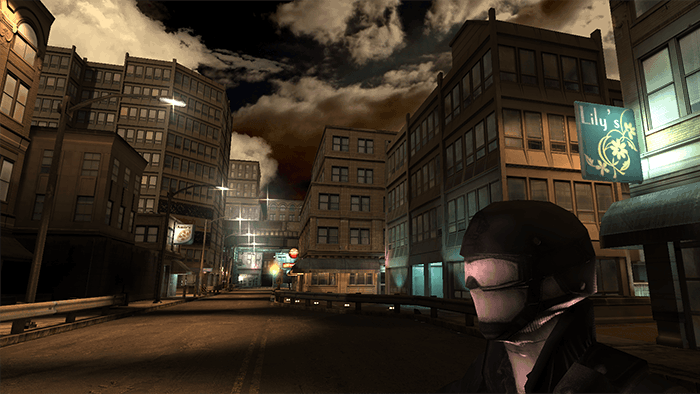 This demo is an infiltration demo : you don’t fight, you sneak. Before passing a corner, you should peek to see if there is something behind it. If an enemy sees or hears you, they’ll come to get you. If you have a DK2, you can just lean to discreetly see what is behind the corner. If you have a DK1 or if you play on a monitor, you can virtually lean using the LB/RB or Q/E keys. You have to find different servers to complete the game. You can look on the ground, there is an indication of where you should go. The game is made to be played with headphones, in order to hear the story, and to hear the cameras. SO PLAY WITH SOUND ON! (please.)

In this world, the government surveillance is everywhere. In order to prevent terrorists attacks, everything is monitored. Everybody has to stay at home by night, and government agents are patrolling. A small group, called Resistance, is against that government surveillance.  They believe in privacy.  You are a resistance agent, freshly recruited.  This is your first mission, and you will have to perform an MITM attack, a common hack. You’ll not be alone during this mission: Lux, an artificial intelligence developed by Resistance, will help you. During this mission, you’ll have to avoid the government agents and the cameras. Be silent, you can’t get caught. Don’t be seen. The Resistance needs you.