Thursday Oculus presented the first consumer version of the virtual reality goggles the Oculus Rift. The Oculus Rift will come to the market in the first quarter of 2016. Besides the glasses OculusVR also showed the also its new logo. 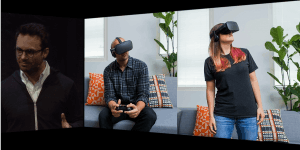 The presentation could be followed via Twitch.. Brendan Iribe, CEO of Oculus, came up first and spoke about the history of the company that in 2012 began after a Kickstarter campaign. Then Iribe said how sophisticated video games may be, there is always something missing, and appeared a two-dimensional image of a Tyrannosaurus Rex behind him on the presentation screen.

The VR glasses were shown to the public, looks suspiciously the same like the previously leaked images. The hardware consists of the glasses themselves, together with a system that tracks the location of the user in the space, also called constellation tracking system. The glasses are two OLED screens before two lenses. The audio system is also integrated into the seat and creates three-dimensional 360-sound to seem to be constantly in the right direction. The headset can be removed, so its use may own head or earphones.

The headset looks great, but according to the CEO so light that the user does not have the feeling that there is a “big thing” to hang the face. A slide on the lower side allows the user to adjust the distance between the lenses on the own eyes.

Partnership with Oculus and Microsoft

At present, the device comes with an Xbox One controller and a wireless PC adapter. Phil Spencer Head of Xbox told us this is part of a partnership with Microsoft and Oculus. It also explains why OculusVR suddenly pulled back the support for Apple and Linux. Phil explained that Windows 10 has native support for the Oculus Rift. It is possible to stream Xbox One games to glasses, as is now possible via the PC. Games will be perfect to be played in combination with Direct X 12 and he promises no latency!

When Palmer Lucky showed up he presented their half-moon project. The project is about a new controller specially for the Oculus Rift. It consists of two separate components: Oculus Touch. It’s a pair of track controllers which will take VR to the next level. It detects hand presence so you can point at things and give a Thumbs up als Palmer continuously repeated. It also offers manipulation, you can grab stuff and it has a low mental load. You can pick them up and use them without having to learn how to use them. The controller also has traditional inputs. The only downside is that they look a bit strange.

The recommended system made Oculus previously announced. Which come down to 8GB RAM, an Intel i5-4590 and NVidia GeForce GTX 970 or AMD 290. For video output, the VR glasses a HDMI 1.3 port and two USB 3.0 ports needed. The resolution on both OLED displays is 2160×1200 pixels.

The presentation was great. The public wasn’t enthusiastic but we at VRbites now they properly don’t know a thing about VR and haven’t experienced it yet. We were cheering on our bench…

The show starts in 35 minutes, so you can skip the first part 🙂