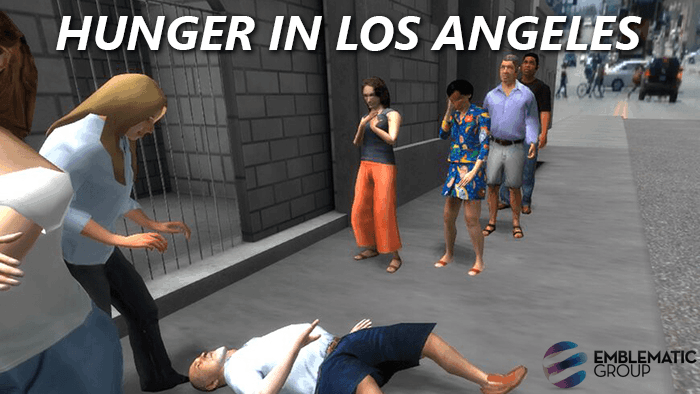 This machinima video shows Hunger in Los Angeles from the viewpoint of a witness/participant who is experiencing the recreation of a real event that unfolded on a hot August day. The situation transpired at the First Unitarian Church on 6th Street in Los Angeles, when the woman running a food bank line is overwhelmed. “There are too many people,” she pants. And then, much louder, shouting in frustration, “There are too many people!” Only minutes later a man falls to the ground in a diabetic coma. The line is so long that his blood sugar has dropped dangerously low while waiting for food.

Invisible to the average American, hunger is an insidious problem facing this country. More than one in five adults suffer with food issues and the rates are worse for children. The events of that day are mirrored circumstances around the country. Food banks simply can’t keep up.

While it is a story well worth reporting, coverage about the issue in the newspaper, on TV or on the web barely seem to resonate. In response, HUNGER IN LOS ANGELES, puts the public on the scene at the First Unitarian Church and makes them an eyewitness to the unfolding drama by providing a powerful embodied experience. By coupling the latest virtual reality goggles with compelling audio, which tricks the mind into feeling like one is actually there, HUNGER provides unprecedented access to the sights, sounds, feelings and emotions that accompany such a terrifying event. In fact, when this revolutionary brand of journalism was showcased at the 2012 Sundance Film Festival, the strong feelings of being present made audience members try to touch non-existent characters and many cried at the conclusion of the piece.

The 6.5 experience has been edited down in this video and the impact is much greater wearing head mounted display virtual reality googles, as did the audience at Sundance New Frontier, http://www.sundance.org/festival/film-events/hunger-in-los-angeles/ With so many folks coming out of the experience crying, or otherwise deeply disturbed, I began to realize that part of good journalism, of being a civic partner to my audience, is to offer them ways to act. I don’t consider this activism but rather an appropriate interaction. One great organization in Los Angeles is called Mendand another is the Los Angeles Regional Foodbank.

Also, there are two websites that have comprehensive listings of charities and rate them for you, so you can give according to what moves you personally.