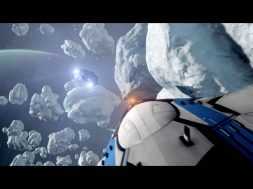 The Elite Dangerous Engineers beta was available for a while now, but since yesterday it’s available for everyone. Today a new trailer is released as well, explaining the new features of the update.

The Engineers 2.1 update will be available for all commanders who own the Elite Dangerous: Horizons season expansion. The update brings new features such as Loot and Crafting and mission updates, as well as hundreds of in-game improvements, tweaks and fixes. The 1.6 update arrived at the same time for everyone owning the base game.