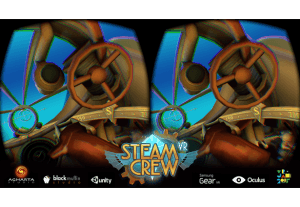 In SteamCrew VR, you and a friend cooperate to pilot a steampunk submarine through dangerous waters. Find someone in your community with a second Gear VR to join up on the same wifi network, and be ready to holler “guns aimed”, “slow down, that’s a rock!”, and of course, “FIRE TORPEDO”! It’s a hilariously good time that highlights just how great VR can be when immersed in a new world with friends. 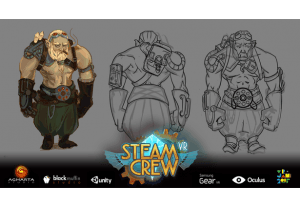 The game is played with the touchpad, it does not require gamepads. A unified control system and world representation ensures players feel aboard the same submarine in both roles. Gaze selection is the natural choice for command selection as it is a very immersive way to interact with objects around.

SteamCrew VR is the winner of the Mobile VR Jam 2015.

In the comming day’s I will discuss some more Gear VR apps for the Samsung Gear VR. Although the Oculus Store is still empty, there are a lot downloadable games for Gear VR out there. 🙂