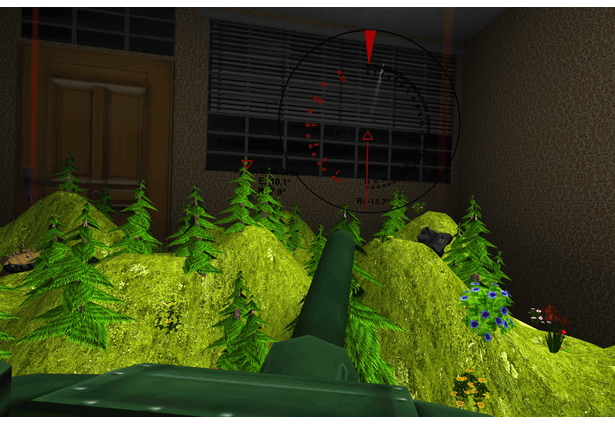 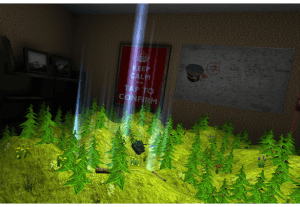 The first game of its type in virtual reality, in Scorched Battalion players take turns launching projectiles at their opponent on a randomly-generated, destructible map. In this case, the player is seated at a wargaming table directing toy-sized tanks on a miniature landscape, and switches to viewing the battlefield from a tank’s perspective to aim shots. The game features unique and memorable characters voiced by actors including Richard Newman, creating a strong connection with the player. 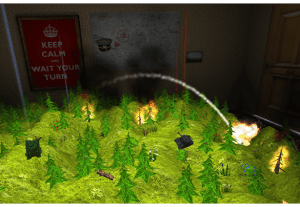 On the gameplay side, innovations include controlling more than one tank per player with simultaneous turns. Two shots are queued by each player and then fired in A,B,B,A order, increasing the importance of anticipating your opponent’s moves and pre-empting them.

On the VR side, the game features a mouse-like selection/cursor system which is more comfortable and natural to use than standard gaze crosshairs. A floating hat acts as an avatar, showing the movements of your opponent’s head, providing a low-resource-usage, low-bandwidth way to represent a multiplayer opponent on a mobile device. The system would be ideally suited to cross-platform multiplayer, and could even be used to represent non-VR players.

All menus and UI are represented in-world, including a clipboard with pages falling away to reveal new menus. A floating pencil is used as a cursor, providing a natural and efficient way for players to control the game while remaining fully immersed in the virtual world. A poster in the background provides dynamic text hints to the player, and audio spatialization is used to attract attention towards important events.