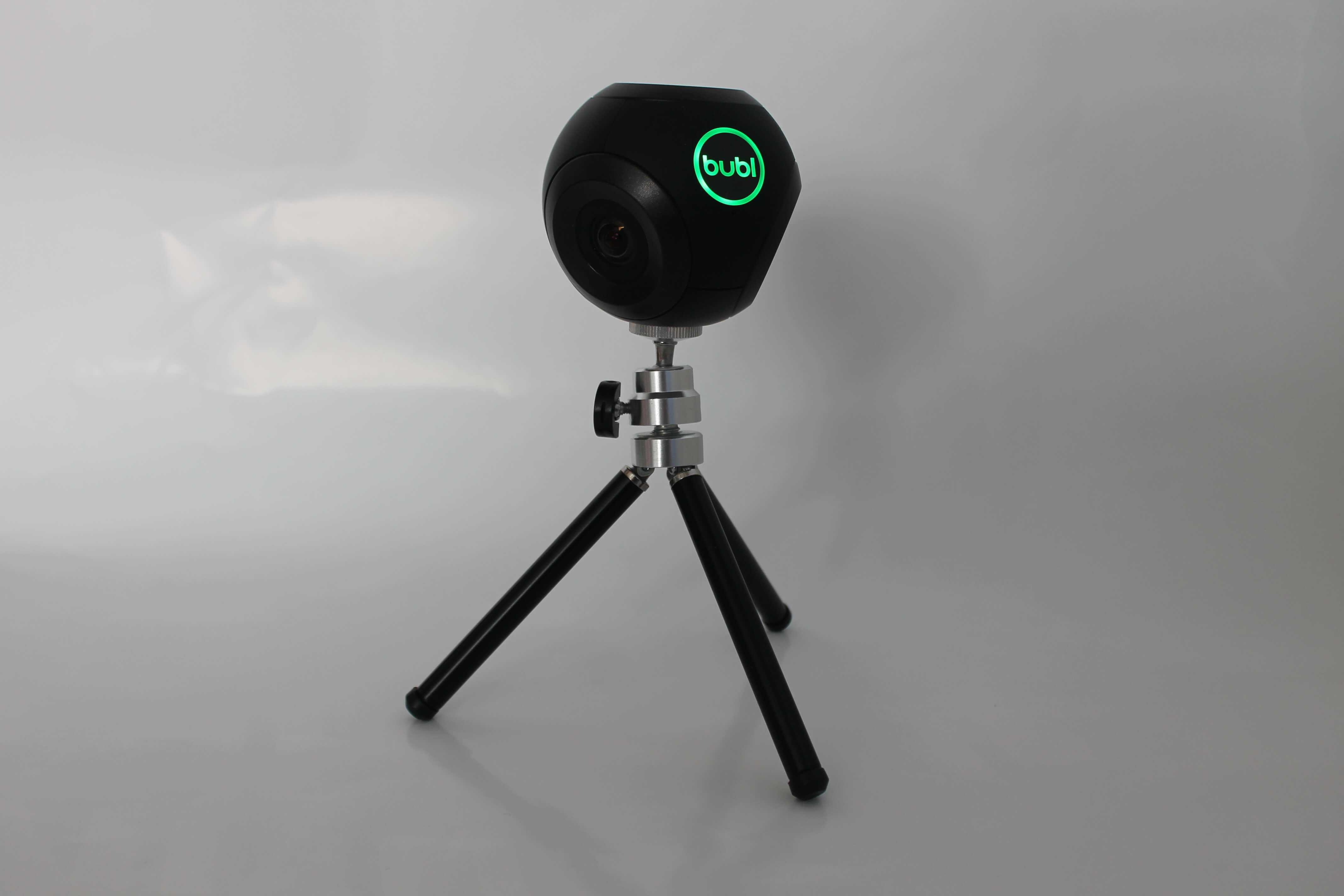 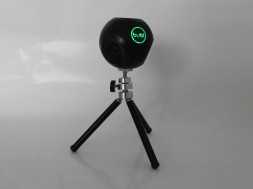 It’s a mouthful for a camera and maybe virtual reality camera or VR camera is a better expression. The Bublcam shoots photos and videos in 360 × 180 degrees for virtually, without a so-called blind spot. This makes the recording suitable to look back with virtual reality glasses such as Google Cardboard, the Samsung Gear VR or Oculus Rift. We’ve received the Bublcam for a review and tested al it’s capabilities.

Who walks around with a circular ball on a stick gets a lot of attention. The Bublcam looks strange at first sight. It is a black 8 cm in diameter ball-shaped camera (around the size of a tennis ball). It has four stereographic lenses with each a 5MP camera behind it. In between there is a small slot for a microSD card and the slot sits the connection for the mini-USB port. You will find a big round button with logo in the middle of the Bublcam. If Bublcam is turned on the logo lifts in different colors. You can tell by the color if the video or photo mode is enabled and if the camera is recording. At the bottom of the camera is the thread for the supplied tripod.

Because of its shape, there is no room for additional features such as a display. The Bublcam is operated via the button or Bublcam app that you can install on your mobile phone or tablet. The Bublcam has a built-in Wi-Fi router, which connects to your device. You can then view live video, take pictures and video, and adjust settings such as the quality with this app.

The Bublcam uses a wifi-connection, you will lose the internet connection on your smartphone or tablet as soon as you connect to the camera. This is a small drawback, because it makes publishing content a clumsy task.

Another problem we’ve experienced is not a fault of the Bublcam, but VR camera’s in general. To create a picture an extension such as a tripod or selfiestick is necessary.  In locations where cameras extensions are prohibited, the Bublcam is a big point for discussion. We couldn’t use the Bublcam at Disneyland Resort Paris because of the extension rule they maintain. We were regularly approached, and demanded at times we left the place. Also museums are not happy with camera extensions. This is a sad development, because these are the special places you want to record the complete surrounding. Hopefully an exception can be made in time for 360-degree cameras.

The new technology is still in its early stages, we run into a lot of software related issues and blunders. It takes a lot to get a recording published on social media. The camera takes four separate images (so called a multiplex images). These four separate images have to be processed (stitched) into one large image. A processed image is also called Equirectangulare-image. Unfortunately, the camera can’t do this by itself and nether can the app do it. If you want to publish a photo or video on YouTube or Facebook, you have to upload it to the so-called Bubl cloud. For this you must first download the photo or video from the Bublcam to your phone or tablet. Then you have to disconnect the Wi-Fi connection with the Bublcam and connect to the internet. With the app you upload the image to the Bubl cloud. It may take some time before an image is processed. You can’t download the processed images with the app, but only through the browser on your phone or computer. If you finally downloaded the images, you can upload it to the desired social media. A whole detour for something that could have been a whole lot easier in our opinion.

We must remember that it is quite an achievement to create so much technique in such a small ball and sell it for a reasonable price. But the quality is a big drawback. You can compare the quality with budget smartphones or the front cams of high end smartphone. A equirectangulare image is about 14 megapixels in size. Videos can be recorded at 1920 x 1920, but with only 15 frames per second it like looking at an old webcam with a terrible internet connection. By lowering the quality to 1440 x 1440 you can record at 30 fps. Playing back these videos on a small window on Facebook it is watchable, but in virtual reality you lose a lot details. You can’t even see the faces of people you’ve recorded. I’ve posted some examples below.

There are many technical hitches to the camera, but when you look back at your own holiday snaps all the effort is forgotten. Although video’s aren’t optimal photo’s look good enough to watch back and enjoy. It’s a very special feeling to be back in the place where you took the picture. I’ve used the Oculus Rift with the free software Virtual Desktop to accomplish this. Processed and downloaded images and videos can easily be opened with the software.

My experience has taught me that this technique is definitely the future. It was amazing to watch the parades from Disneyland back. I could follow the floats from left to right and magical moments such as a characters that greets my kids weren’t missed out. I didn’t have to move back and forth with the camera but could easily hold my ball still in my hands, while looking at everything that was happening around me.

Facebook, Google and Microsoft are investing heavily in new technology so it will be accessible to everyone. In time everyone will share their 360 degree videos on Facebook. It is already possible to watch 360 Facebook video’s in VR with the Samsung Gear VR headset. If you’re lucky enough to possess such a headset you can watch the video’s we’ve posted on our Facebook page.

The Bublcam is one of the first of its kind. If you want to create quality images in 360 degrees and easily share them with your friends, it’s better to wait a few years until the technology is further evaluated. Who wants to experiment with 360 × 180-degree photography: The Bublcam is an affordable alternative to the expensive GoPro solutions and Nokia OZO (which costs around 60 thousand dollar). We’ve had a lot of fun during the camera tests and are really thankful for the opportunity. If you’re a VR enthusiast, you can take the Bublcam in consideration.