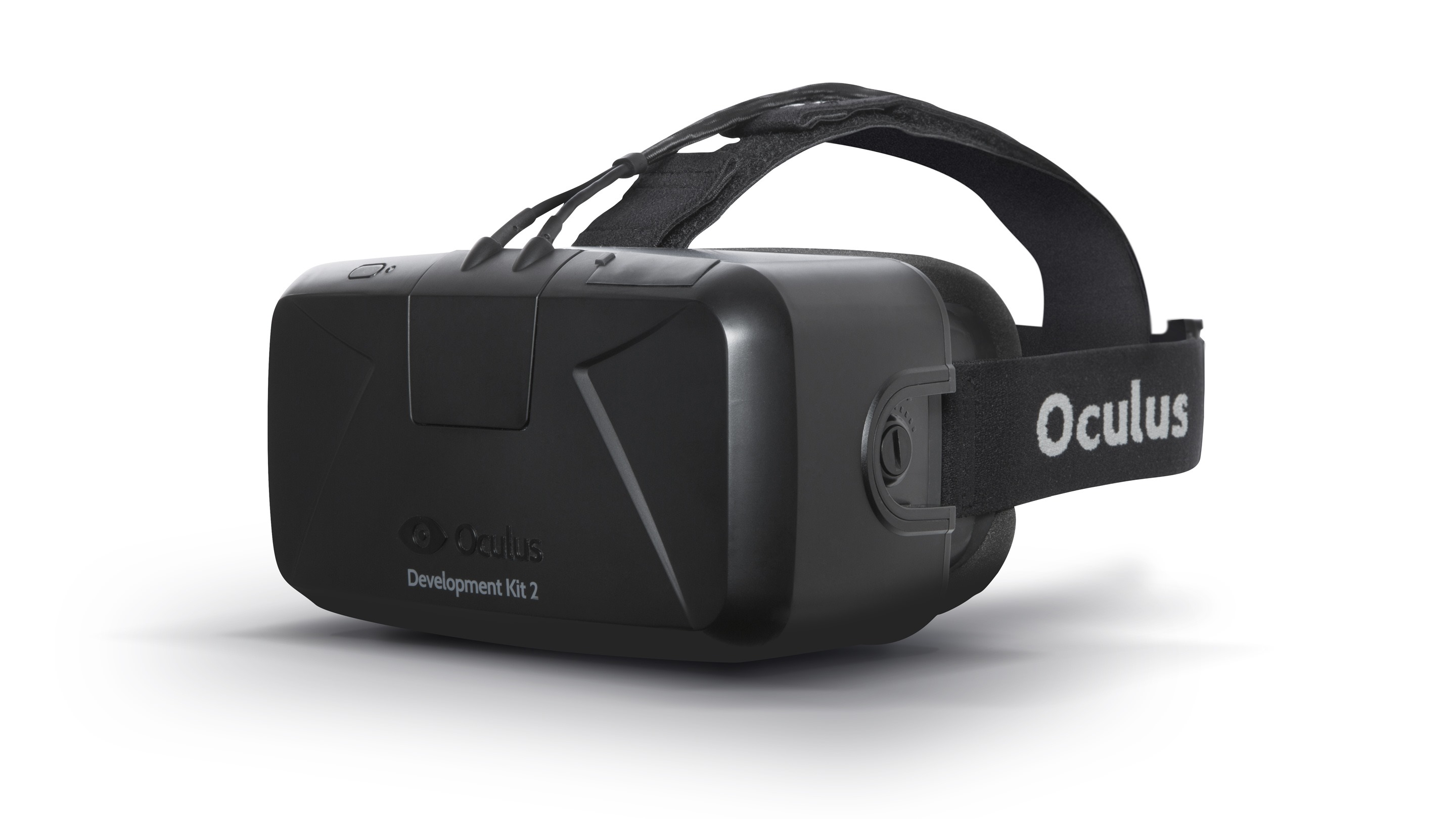 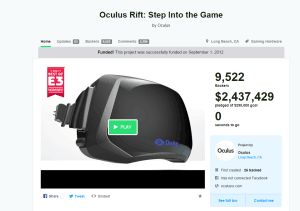 On August 1, 2012 Palmer Lucky launched a campaign via Kickstarter to raise funds for the development of his virtual reality glasses: the Oculus Rift. The requested amount of $ 250,000 was collected within four hours and eventually he collected $ 2.4 million dollars. The beginning of a new success had begun. The first developer kits were quickly sent to the enthusiastic supporters, so the world could experience this fantastic invention. The Kickstarter success showed how great potential of the Oculus Rift is. Mark Zuckerberg, the founder of Facebook, sees a big future in it. That’s why Facebook bought OculusVR in March of this year for the significant amount of two billion dollars. The new developers kit was displayed in the same period: The Oculus Rift DK2.

What is the Oculus Rift?

The Oculus Rift is a virtual reality glasses (also called HMD), crammed with motion and position sensors and a high resolution display. The sensors ensure that the position of the glasses are determined exactly and are followed without any perceptible delay in the display. The concept of the Oculus Rift is simple: take a small monitor, connect it to a number of sensors and connect it to a computer.

The idea is so simple, that any modern smartphone could serve as a virtual reality device. Therefore, Google designed a free virtual reality device for everyone: Google Cardboard. Google Cardboard is nothing more than a blueprint, which lets you create a virtual reality glasses from a piece of cardboard. Put your smartphone in the cardboard box, and you have the same idea as an Oculus Rift. Sure, the Oculus Rift is a lot faster, is more accurate and has lot better graphics, but in the absence of this device is good fun and a good way to experience VR. You can download the design online https://cardboard.withgoogle.com/, but you can also purchase a pre-cut Google Cardboard via eBay .

Oculus Rift is more than a phone 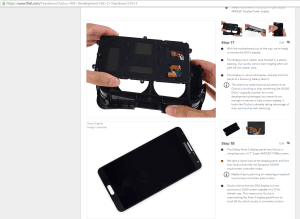 On the website www.ifixit.com you wil l find a tear down of the Oculus Rift. This is when it came to light that the display in the Oculus Rift DK2, was the screen of a Samsung Galaxy Note 3. The screen includes the digitizer and the Samsung logo. A bit strange but also very innovative. The full-HD Super AMOLED screen, which runs in the Oculus at 73 Hz, is cheap and very suitable as VR display. A Six-Axis MEMS Motion Tracking Sensor is used for motion tracking. This sensor detects six degrees of freedom: forward and backward (surging), up and down (heaving), left and right (swaying), forward and backward tilt (pitching), left and right rotation (yawing) and left tilt to the right (rolling). There are also a lot of LED lights in the Oculus Rift DK2. These are for the position tracking system. These lights are registered via an infrared camera, whereby the depth can be determined. The oculus Rift is not dependent on its own processor, such as in a smartphone. With a HDMI cable connected to the computer it can show a lot more graphic violence on the small AMOLED screen. You can say it has a bit more technique than a smartphone. The prototype shown recently (the Crescent Bay), throws in a little extra. The Crescent Bay includes a headset that with a new audio technology, which uses sound played in 3D. There are rumors that the screen runs at 90 Hz and is in fact an UHD display (2560×1440 pixels). Possibly that of a Samsung Galaxy Note 4? With this screen the pixels would be barely visible. , In the Oculus Rift DK2 you can still perceive clearly the small pixels.

What do you get with a DK2? 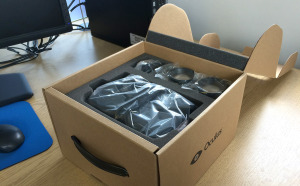 Although the developers kit is intended for developers, it is bought by al lot of enthusiasts. OculusVR clearly warns before the purchase, that it is an early version and not for consumers. The Oculus Rift DK2 is solely intended to develop software. But what exactly do you get when you decide to order a DK2? The price of an Oculus Rift DK2 depends on the country you live in. In Holland you pay about 490 dollars including shipping and VAT. The delivery time is about two to three months. In contrast to the beautifull plastic case of the fist developers kit, the oculus Rift DK2 is shipped in a brown cardboard packaging. In this package you will find the HMD (head-mounted display), the Positional Tracker DK2, an adapter to power the USB port on the HMD, special HDMI and USB cable for the HMD (about ten feet long) a DVI to HDMI converter, USB and micro jack cable for Positional Tracker (about ten feet long), a lens cloth and two pairs of lenses (a myopic view and a pair of lenses for standard view). You don’t get any support with it, the developers forum is only place where you can ask questions.

To connect the Oculus Rift DK2 you only need a little bit of technical knowledge. The Positional Tracker DK2 is like a webcam and can be positioned on your computer screen. There is a mini-USB and micro jack connector that can be connected to your PC and the Rift. A long USB and HDMI cable connected to the HMD. At end of this cable is a small housing for the micro jack of Positional Tracker and the power supply. The runtime files, which can be found on the developers website of OculusVR, have a Configuration Utility. Through this utility you can set the type of lenses and Display Mode of the Oculus Rift. The Oculus Rift is connected as an additional monitor. It has to set manually to Landscape (mirrored), because the image in the HMD is rotated. After you have set all the settings, you are ready to use the Oculus Rift.

The HMD on your head

The HMD has an elastic strap and a plastic adjuster to fasten the device on your head. At the top is an extra band with tabs to bring the HDMI and USB cable back. The Oculus Rift DK2 weighs an acceptable 440 grams. There is a fairly comfortable soft foam frame at the points where the HMD is held against the head if you have a big nose, and Oculus them rest on it, it can get a bit irritated over time. Just behind the foam, at the top and bottom sides there are small grate to prevent fogging of the lenses. The distance of the lenses can be set through two rotary knobs on either sides of the HMD. Because the cable is quite long, you have the space to move freely and you will quickly forget about them.

At the moment there are only a handful of games that can be used with the Oculus Rift. The menus in games are often illegible, because they are displayed with a resolution of 1920×1080. The screen needs to be 960×1080 pixels. Only when the game starts up, it will displayed in the right resolution.

As soon as the game has started, you forget all the hassles. After a few seconds you will disappear in a digital and virtual world. This can be a very strange sensation for your brains. Especially Cyber Space is a game where the brains get significantly shaken up. Once you put on the Oculus, you sit in the chair of the so-called ‘Pendulum ride’. This chair is connected to a big arm that will spin into the air. What makes this experience so special, is that your brains that generate feelings you might only experience in the actual attraction. You feel the tingling of the real fall in your belly! Most visitors will not be able to step in without yelling. Also racing and flying are suddenly much more real. When you sit in a car or plane you can look around and feel the speed, this makes it a phenomenal unforgettable experience. Especially if you use a professional steering wheel or joystick with it. No more three monitors, no more buttons to look beside you, just look at your side. The experience is so real, that some people have difficulties to come back to the real world or have flashbacks!

We are convinced that the Oculus Rift is going to change the entertainment industry completely. Anyone who has ever played a game with this device, will never go back to a monitor! Yet it is wise to skip the developers kit. While the Oculus Rift DK2 already leaves a phenomenal impression, it is still a product that is in a ‘test’ face. The software is not finished, you can clearly see the pixels on the screen, the lenses are of low quality and there are only few games that support it. It is better to wait until the consumer version. In the meantime you can save some money for a powerful video card. If consumer version really get a QHD screen at 90 Hz you will need a lot of GPU power!