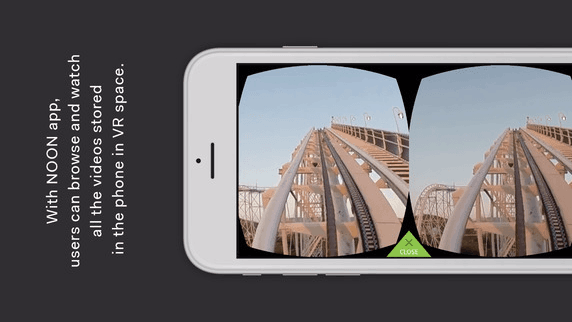 With NOON app, users can browse and watch all the videos stored in the phone in VR space. 360-degree videos, stereoscopic 3D videos, and normal 2D videos are supported. Users can select and play the videos by simply changing the head orientation in VR mode. Even during the video playback in VR mode, users can adjust the screen size, change the screen aspect ratio, adjust the volume, seek the video, and switch the video formats. In VR mode, users can re-orient the front direction of the content by simply tapping any part of the headset or the phone through vibration detection mechanism. In VR mode, the control menu pops up by double-tapping the headset or the phone. To activate any button in VR mode, just hover the on-screen cursor on it for two seconds. NOON app provides an intuitive user experience in VR mode.