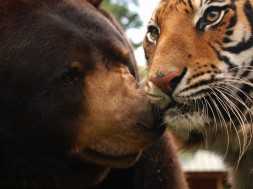 Today I’ve read an article in the Daily Mail that really touched my heart. The story is about a bear Baloo, Lion Leo and the Bengal tiger Shere Khan. They were discovered during a drug raid in Atlanta. They were just two months old and found the basement of the house. The animals suffered badly and needed surgery to stay alive.

The caregivers found that they were too much abused to release them back into the wild. So they found shelter in Animal Sanctuary “Noah’s Ark” in Georgia. Obvious the animals made immediately clear that ‘something’ was missing when one of them was gone for surgery. So the zookeepers decided to held them together. ,, We could take them apart, but they arrived as a family, “says director Diane Smith. ,, To our information, this is the only place you’ll find such a special combination.”

What does this have to do with VR? Nothing, but this story touched me words. I imagine how much it would’ve touched me if this story was recorded in a virtual reality documentary. I understand hunger and war is something that needs to be told, but I think these happy stories would do amazingly well in VR. So if you live in Georgia and you happen to have a VR-camera, I would love to see this story in VR.