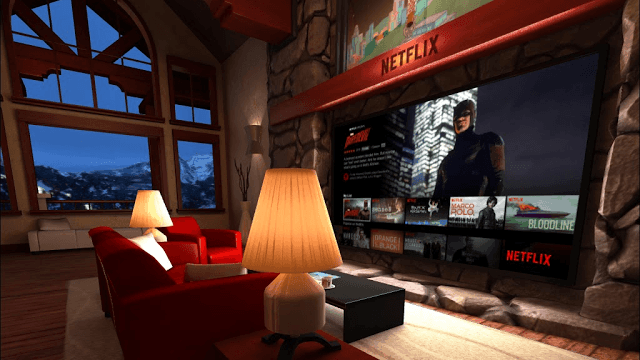 John Carmack (CTO of Oculus and programmer extraordinaire) is the creator of Netflix the TV user interface for the Samsung Gear VR. This app could end up being the most important app that shoot mobile VR into the success it disservices.

At his presentation Carmack told the audience he spent two days with Netflix VP of Engineering Anthony Park, hoping to create the application in this timespan. When the two days were over the engineer went home and colleagues joked at Carmack that he broke the Netflix engineer.

The result after a few days of remote work is an application that don’t even need the beta tag! Netflix works flawlessly and is already available in the Oculus Store for free, you only need a Netflix subscription.

Carmack wrote a “VR 2D Shell” application that functioned like a very simplified version of our Oculus Cinema application. The core Netflix application uses two Android Surfaces – one for the user interface layer, and one for the decoded video layer. The resolution is limited to 720p HD t give you the best experience in the VR headsets available today. The power consumption is still a bit too high. With a battery of 70% you can watch for two hours. This still draws twice as much power as the standard Netflix Android app.

In the Netflix app you take place on a big virtual couch in a small apartment. Outside you’ll see snow and mountains so it’s probably in some place that looks like Switzerland. The controls are done with the TouchPad of the Gear VR. The first time the app starts you can fill in your login information on a virtual keyboard and start the app. Sliding on touchpad moves the videos and tapping it selects one. As you start a video, the lights dim and you can sit back and watch Netlix on the big screen.

It’s hard to believe this app was made in just a few days. It works flawlessly! The only drawback is it’s battery usage. My Samsung Galaxy Note 4 got really hot and you need at least 70% of battery power to watch a full movie. With my Samsung Galaxy Note 4 I can charge an extra battery while watching, but Galaxy S6 or Note 5 owners need to charge their phones before they can continue, since they can’t change the battery.

The app works great, looks amazing and is by far one of the most important apps available for the Gear VR. One thing you need to realize is the power consumption.