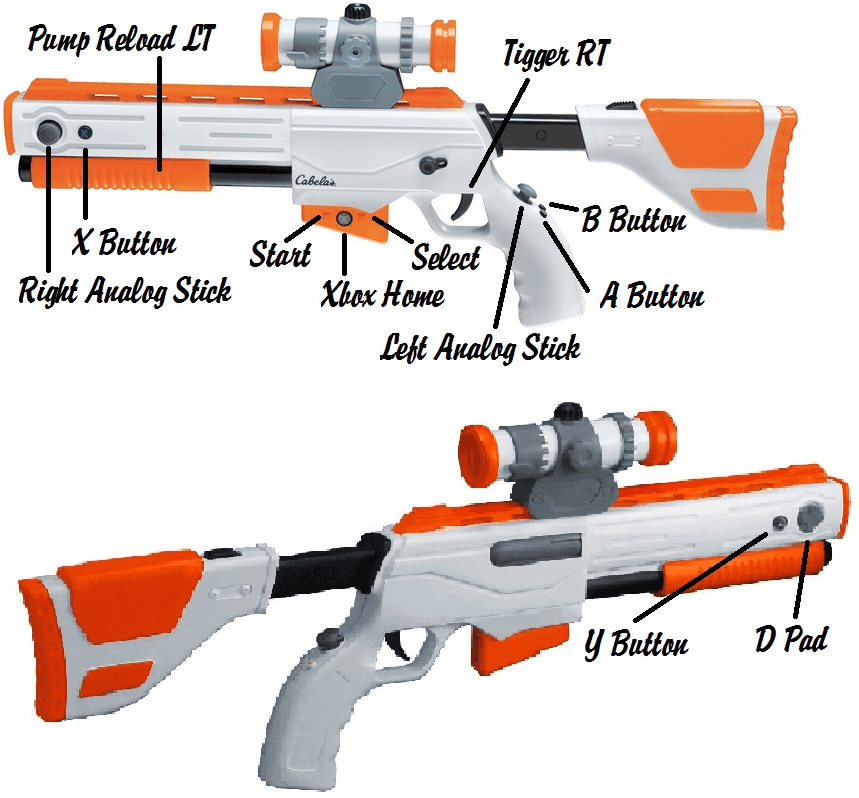 In 2010 Cabela released the Top Shot Elite gun peripheral for the Xbox 360, PS3, and Wii consoles.  For this re

view I will be using the Xbox 360 version.   It is essentially a full Xbox controller laid out into the shape of a gun.

Most modern games on the PC now come pre configured with button mappings for the Xbox 360 standard controller.  All that is required to use any Xbox peripheral in Windows is a usb dongle like the one shown below.  They can typically be purchased in the sub $10 range.

Click on this text for detailed instructions on how to configure.

For games that do not innately operate with the Xbox configuration, Xpadder can be used to map the controller buttons to any keystrokes, etc. and be saved as separate configuration files for each game played.  This program is very straight forward yet extremely powerful, giving the ability to customize controls into nearly any configuration imaginable.   Xpadder can be downloaded from the link: http://www.xpadder.com

At first glance the plastic mockup looks rather large, and it is measuring 25 inches in length set to the longest configuration.  However, the stock on the back can be removed, decreasing its size to a mere 16 inches.  I found I prefer to leave the stock in place as it gives balance to the device, and most FPS games use larger weapons (i.e. rifles, shotguns, etc.)  that really translate well with the Top Shot.  The gun is EXTREMELY light and can easily be held for an hour or more with little to no fatigue experienced.

When it comes to achieving convincing immersion within a virtual reality (VR) environment, it is imperative to be holding an object with similar dimensional composition to the one being represented within the VR space.  Whilst wearing the Oculus Rift in a standing position, spinning within real space, aiming/shooting/attacking virtual enemies…. there simply is NO SUBTITUTE.

The controller is extremely light and ergonomically comfortable,  easy to configure with almost any pc game, and relatively inexpensive ($59.99 when bundled with Dangerous Hunts, however it can be routinely found on Amazon for $20-$30).

The only cons with the controller would be a lack of force feedback response; which would be hugely immersive, and the led sensor bar does not operate on the pc without extreme effort and even then only on limited titles.  On the Xbox 360, the sensors bar can be used to track where the gun is pointed on the screen much like the wii sensor bar does with a wii controller.  However, once the Sixense Stem system gets released later this year, it will be effortless to simply attach one of the stem packs to the Top Shot and have complete 1:1 tracking.  The only gun peripheral I have found to be superior to Cabela’s would be the Delta Six controller Kickstarted two years ago.  However it is at a significantly higher price point (349.99) and caters to only the elite VR enthusiast. http://www.thedeltasix.com/

Overall the gun is an outstanding value and adds heaps of immersion while playing in VR.  Click here for a demo video of the Top Shot Elite being used to play Alien Isolation: Crew Expendable with the Oculus Rift.