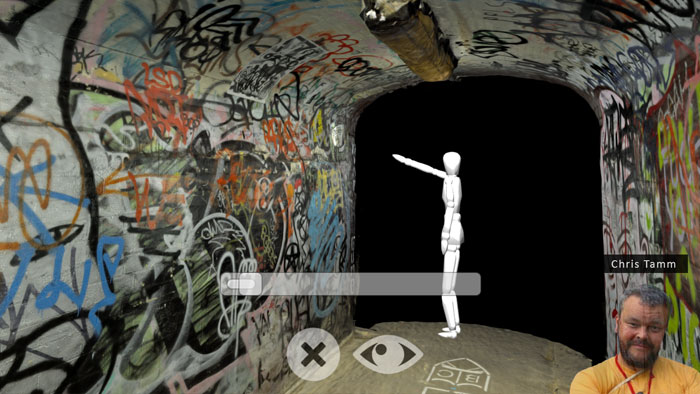 The Trafalgar St tunnel reconstruction is the most recent example of research by Josh Harle into approaches to ‘digital heritage’: using cutting-edge digital capture technology to document and explore one of Sydney’s most eye-catching graffiti sites at two points in its recent history.

The reconstruction approach combines thousands of photographs, using hundred of hours of processing time to render them into a single 3D model. At the final count, the tunnel utilised more than 40 gigapixels of image data to produce a super-high resolution reconstructed surface. This final reconstruction has been used to create an interactive, Unity 3D-based Oculus Rift tour.

The tour allows visitors to walk through the length of the tunnel and zoom in to examine an area in high-detail. On top of this, Harle has added virtual storytellers and a time-lapse feature to bring the app to life: with the help of its local denizens, the tunnel is fleshed out through guided tours and stories, moving through the space and punctuated by gestures toward their favourite parts. In addition, by taking multiple captures months apart, Harle is able to breathtakingly transform the tunnel in the midst of his own tour, showing the striking transitions between different points in its history.